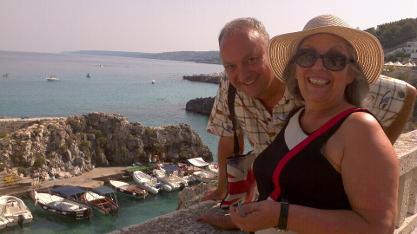 We make sure that each Jewish Heritage Tour we organize provides you with an experience that is memorable. Our programs combine an exploration of Jewish history and culture; outstanding, dynamic people; important local sites of interest; striking countryside; deluxe accommodations; and the company of like-minded travelers.

Our tour is designed to satisfy the most discerning travelers who want to explore the highlights of Southern Italy with its fascinating cultural heritage, excellent food and wine and stunning, picturesque landscapes, distinctive and delightful, with crystalline seas, pretty countryside and endless sunshine. Puglia has a treasure of Jewish history and is the right place to spend your vacation.

Welcome to Apulia! We’ll meet you from Bari or Brindisi airport or train station and then take you for a delicious home-style lunch based on our regional specialties. After lunch we’ll head to your accommodation in Ostuni, the picturesque, hilltop, medieval 'white city' overlooking the Adriatic Sea. You'll spend the first three nights at either the 5* boutique hotel, “La Sommita Relais”, with its Michelin star restaurant, set in a 16th century former monastery in the heart of Ostuni. Alternatively, if you prefer to relax in the countryside, you can enjoy the peaceful atmosphere of a former agricultural estate, the “Masseria Torre Coccaro”, now transformed into a luxury golf and spa resort. Dinner at Osteria del Tempo Perso in Ostuni.

This morning our first stop is Cisternino, where we’ll stroll through the narrow streets of this medieval village, Then we'll drive to Alberobello, the famous Unesco World Heritage Site, famed for its conical-shaped dwellings, built from limestone with rooves stacked of stone tiles without mortar. Lunch at a family-run restaurant “ La cantina” where the chef Francesco will cook a delicious meal in front of you in his open kitchen. In the afternoon we set off for Polignano a Mare, renowned for its breathtaking balconies with views to the crashing waves of the Adriatic below. Also the birthplace of the Italian singer, Domenico Modugno famous for 'Volare'.

Pick up from your accommodation at 09:30 am. Drive to Manduria (one hour approx.) and visit the synagogue in what remains of the Jewish ghetto of Manduria. Lunch in Manduria at Trattoria dei Mercanti. In the afternoon we will drive to Oria and enjoy a walk through the “Door of the Jews” (Porta degli Ebrei) which leads to the Jewish district which developed between the ninth and eleventh centuries. The main square is named after Shabbethai Abraham Donnolo, a medieval doctor and scientist who lived in Oria; one of Tel Aviv's hospitals is named after him. We will then proceed to Brindisi (45 minutes) and visit the Provincial Archaeological Museum where we will appreciate some amazing Jewish poetry on medieval tombstones.

From Ostuni we’ll drive south, past Lecce, crossing the heel of Italy to Gallipoli, a charming fishing village on the Ionic Gulf. After a stroll through the fish market we will visit an underground oil mill before enjoying a nice lunch at “Puritate” one of the best fish restaurants on the Salento peninsula. In the afternoon we’ll head to a fantastic local winery “Schola Sarmenti”, in Nardò, where you’ll visit its cantina and taste their award winning, organic wines. We will then drive 10 minutes to Santa Maria al Bagno and visit the “Museo della Memoria e della Accoglienza” with info on this center where one thoundand German and Polish Jewish refugees lived from 1943 to 1947 waiting to go to Israel or the US.

As we walk to and from the restaurant we will experience Lecce beautifully lit at night, the Palazzos and the stunning facade of the highly decorated Santa Croce. You will enjoy three nights in the 5* luxury resort Hotel Risorgimento, situated in the heart of this beautiful Baroque city; this elegant resort has been an inn since the 15th century. The gourmet restaurant's executive chef, Cosimo Simmini, uses excellent local produce and the traditional flavours and aromas of the Salento cuisine. The Wellness Spa, Salus per Aquam, offers an array of relaxing and beauty treatments and you may enjoy a Hammam Roman bath.

DAY 5: HISTORICAL LECCE AND THE MARVELS OF JEWISH OTRANTO

After breakfast we will explore the city of Lecce, much of the architecture is in the highly decorative late Baroque style , which flourished in the 17th century and earned the city the name “ Florence of South”.

We will start with a visit to the “Jewish Museum ” and its medieval Mikveh. Next to Piazza Saint Oronzo and the magnificent Roman Amphitheatre. We will have our lunch at “Il Cantico dei Cantici” in the stunning seaside town of Otranto, one of Puglia's most vibrant towns, overlooking a pretty harbour, famous for the amazing Cathedral that features the largest and most beautiful floor mosaic in Europe.

Between the 9th and 12th centuries, Otranto was one of the main centers of Jewish learning in Apulia. As the Jewish community prospered thanks to commerce and entrepreneurial ventures, scholars gave lasting contributions to the study of the Bible, the Mishnah and the Talmud of Babylon.

When Benjamin of Tudela visited Otranto in 1159, he found about 500 Jews there. It was considered one of the most important rabbinical centers in Europe. In the Sefer ha-Yashar, Jacob Tam (12th century) quotes an old saying paraphrasing Isaiah 2:3: “For out of Bari shall go forth the Law and the word of the Lord from Otranto.

DAY 6 : THE BASILICA OF GALATINA AND BEAUTIFUL TRICASE

in the morning we will drive to Galatina and visit the Basilica Santa Caterina d'Alessandria with its amazing frescoes and paintings similar to those at the Basilica San Francesco in Assisi. It is thought that some of the artists that worked with Giotto were also employed to work here. We will then drive down to Leuca where we will have lunch at “Osteria Del Pardo” famous for its fish and seafood dishes. In the afternoon we will visit the centuries old organic winery “Castel di Salve” owned by the Winspeare family, that brings together wines produced from four of their vineyards which, are geographically very close but fall into four very distinct microclimates and soil environments. You'll have a chance to taste them all! We will then visit the old town of Tricase and enjoy an aperitif at “Farmacia Bilboa”. You are then free to enjoy the evening in Tricase before we drive back to Lecce.

DAY 7: THE SASSI OF MATERA

Today we leave Lecce; we’ll start the tour with a visit to Grottaglie, famed for its ceramics, where we will visit some workshops. We then continue our journey to Matera, a Unesco World Heritage Site, where we will have a delicious lunch at “Falco Grillaio” then begin to explore the fascinating Sassi (stone cave district). The people of Matera once lived in these Sassi, dwellings scooped out of the rock. Many chapels were also gouged out of the rock and we will be visiting some of these chapels and dwellings on route. We will spend two nights in the spectacular hotel, “Sextantio Grotte della Civita” a cultural project of preservation and renovation located in the oldest part of the sassi and overlooking the Gravina (ravine) stream and the dramatic scenery of the Murgia Park. We will dine at Abbondanza, a chic restaurant in a cave.

After breakfast, we will visit the “Crypt of the Original Sin” commonly known as the Sistine Chapel of Rupestrian art; it was discovered as late as 1963. Experts have dated the cycle of paintings back to the second half of the eighth century, painted by Basilian monks. After a wonderful lunch at “Baccanti” you may choose between a bike tour to a natural preservation area just outside Matera or an easy walk in the old town to look at workshops of local artisans or perhaps relax at a local cafe and pastry shop.

Today we travel to “Castel del Monte” built in the 13th century by the Norman emperor Fredrick the second to be used as a hunting lodge. This is one of the most sophisticated secular buildings of the middle ages and its octagonal geometry has inspired many novels and mistery tales. Masterwork of medieval architecture, fusing cultural elements from Northern Europe, the Middle East and the classical Hellenic world, the castle is formed by geometrical shapes rich in symbolic meaning. The fortification’s layout consists of an octagonal base with an octagonal tower at each corner and contains eight trapezoidal rooms within. It is said that there was also once an octagonal basin in the courtyard, representing the Holy Grail. Lunch at “Antichi Sapori” in Andria or “Corte in Fiore” in Trani, both excellent awarded restaurants. In the afternoon we will visit Trani and its amazing cathedral built by the sea. During the middle ages the town was an active port and bustled with mercantile activity with merchants and Knight Templars that travelled throughout the Mediterranean and the Holy Land. We will also visit the only working synagogues in Puglia, “Schola Nova”, built in the 13th century, at the time of the greatest prosperity of the Jewish community in Trani, which in 1160 had a population of 200 families. Here lived Isaiah of Trani the Elder (1232-1279), a high Talmudic authority. David, his son, and Isaiah of Trani the Younger, his nephew, followed in his footsteps, as did their descendants until the end of the seventeenth century. We will also visit the church of Sant'Anna, the former “Schola Grande” synagogue built in 1246 and recently tranformed into a museum. We will spend the last night at “Corte in Fiore” in Trani and have dinner at “Le Lampare”.

After breakfast and a little walk through the marina and fish market, we’ll escort you to Brindisi or Bari airport for your return journey. We hope you will return to visit us and keep exploring more of our colourful land. “Goodbye!”